Bison are evolutionary cousins ​​of the extinct aurochs. It is the largest herbivore in Europe, weighing more than 900 kg and up to 188 cm at the withers. The mighty bison has a&nbsplarge head, small eyes, short horns curved at the center, and a&nbspmassive torso with a&nbspcharacteristic hump on the back. The whole body is covered with dark brown hair, which is clearly longer in the lower part of the head on the neck and nape, slightly resembling a&nbsplion's mane.
The basis of the bison's diet is green plants, including grasses found in forests and meadows. Animals also do not despise what grows in farmland, so sometimes they can cause harm. In winter and early spring, they gnaw the bark of trees and shrubs, and look for acorns. They can dig out green shoots from under the snow. A&nbsplarge European bison needs up to 60 kg of fodder each day, so it spends almost all of its time looking for and eating food.

The dramatic history of the bison

Bison lived in the wild in the Bieszczady Mountains back in the 18th century and were valued for their excellent meat and skins. The last hunting was recorded in these lands in 1762. In the nineteenth century, lowland bison appeared only in the Białowieża Primeval Forest, then belonging to the Russian Empire of Tsar Alexander I&nbspRomanov, who, wanting to hunt them, began to protect them. At the beginning of the 20th century, almost 800 individuals lived in the Białowieża Primeval Forest. Unfortunately, during World War I,&nbspbisons were ruthlessly hunted by German soldiers, Russian partisans and numerous poachers. According to the "Encyclopedia Puszcza Białowieska", the last free-living lowland bison died on February 9,&nbsp1921, shot by Bartłomiej Szpakowicz from Białowieża.
Only 54 lowland bison survived in zoos and wildlife parks, and it was from this last handful that the International Bison Protection Society (established in Poland in 1923) selected 12 specimens, which were bought and transported to the Białowieża Forest, where they happily began to breed. To strengthen the blood, a&nbspfew more Caucasian bison (mountain bison), smaller than the one living in Poland, were imported. In the pedigree books, the parents from which the new bison were born were carefully noted. Over time, these beautiful animals began to arrive, and in 1963 it was decided to resettle them in the Bieszczady Mountains.

After the war, the Bieszczady Mountains were deserted, so it was wild in the forest and the bison had peace. After a&nbspyear of acclimatization in the farm, the first five bison were released into the wild, and one of the released bison, Pulpit, became the most famous tramp in the Bieszczady Mountains.
The name reveals its origin. The letters "PU" denoted individuals in which the blood of Polish lowland and mountain bison from the Caucasus was flowing. The desktop loved to wander. In the summer of 1964, the then television, which broadcast only one program from 5&nbsppm to 11 pm, informed viewers almost every day where the Pulpit had reached from the San valley. Żubr, one could say, was a&nbspcelebrity at the time, marking a&nbsproute through the vicinity of Sanok, and then through forests, fields and villages,
as far as Rzeszów, where he visited Rzeszów, and reached Tarnów.
In the 1970s, wild bison began to be hunted. Political heads of state, presidents, ministers and crowned heads came to the world famous hunts in the Bieszczady forests. At that time, Muczne as a&nbsptown completely disappeared from the maps, because the authorities of the People's Republic of Poland organized a&nbspsecret hunting center for dignitaries here. Today, anyone who wants to see a&nbspbison and hunt it can come to Muczne, but fortunately only with a&nbspcamera. 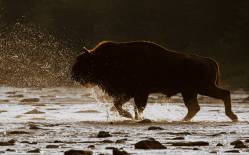