The San Valley is a&nbspparadise for those who love to be by the water, especially in kayaks. Paddling this river is easy and safe, the water is too shallow for boats, so canoeists have this magical landscape to themselves. If you go kayaking, be vigilant. On the river bottom, in the silt, on stones and water plants, there are numerous species of snails (e.g. stream snail), clams (e.g. mussels and peas), leeches and shellfish. Your attention will be drawn to a&nbspbeautiful noble crayfish that likes clean water. Unfortunately, it is less and less common, as it is displaced from the wild by alien species such as American crayfish and zebrafish, imported by numerous breeders and aquarists. Leeches are especially interesting among the water invertebrates of the San River.

A small predator from the San valley

Most leeches are parasites that feed on the blood of vertebrates or the body fluids of invertebrates, and their menu includes insect larvae, fry, or amphibian tadpoles. However, there are also leeches belonging to predators, such as a&nbsprare species (Latin Trochetabykowskii) that feeds on oligochaetes (group of annelids). However, leeches are commonly associated with external parasitism, because many species feed on the blood of vertebrates. They gently suck to the skin and cut the surface with sharp teeth arranged in a&nbspcharacteristic letter Y,&nbspwhich creates a&nbspspecific triangular wound. Then they inject hirudin into the body, which prevents the blood from clotting and sucking it out. When eaten, they fall off the skin to hunt their prey again after many weeks (or even months).

If the leeches do not inspire your confidence, this is a&nbspbig mistake. Many interesting substances used in medicine have been found in the bodies of wild leeches. In addition to the mentioned hirudin, the best of the existing anticoagulant drugs, leeches produce eglin -&nbspan anti-inflammatory agent and antioxidant, hementin -&nbspan enzyme capable of breaking blood clots, serotonin and dopamine, i.e. neurotransmitters regulating the flow of nerve impulses, chloromycetin -&nbspan antibiotic with a&nbspstrong, antibacterial effect .&nbspThis remarkable therapeutic set is found mainly in the industrially bred medicinal leech. The leech is an increasingly rare and protected species. Along the canoeing route, it can be seen near the mouth of the San in the Osława River, which flows just before Sanok. A&nbspfragment of the San oxbow lake on the right bank has become a&nbspspecial area of ​​habitat protection "Sanisko in Bykowce" (PLH180045 ).&nbspThis is where you should go if you want to see the leeches. 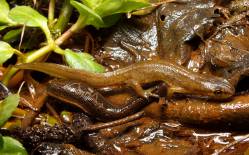