The strangest San's "fish" - a beaver

Interesting animal of the San

The beaver (Latin Castorfiber) is the strangest "fish" of the San. Many will be surprised -&nbsphow is it a&nbspfish? After all, a&nbspbeaver is a&nbspmammal. Indeed, it is so, but due to the tail covered with a "scales" resembling fish scales, in the Middle Ages beavers were classified as fish. Fish can be eaten in the post and so, among others magnates and monastic brothers avoided the ban on eating meat when eating fried or baked beavers. The beaver is the largest rodent in Eurasia, with an adult body weight of up to 29 kg and a&nbsplength of 110 cm. The animal, which in Poland in the 20th century was almost exterminated, was saved thanks to many efforts of naturalists and reintroduced into natural habitats, among others in the San basins.
Beavers on the banks of rivers build several-chamber underground houses, the so-called The lodges are reinforced with the accumulated poles, sticks and mud. It's true that they're good engineers?
However, this is not all the skills of these animals. Clever beavers block small watercourses with wooden and mud dams to find food more easily. Dams raise the water level on the river, thanks to which beavers can freely and without exposure to an attack by a&nbspfox or a&nbspwolf, cut trees and bushes that are their food. In the mainstream of the San river, where the river becomes wide, you won't find muddy dams. However, if we moor the canoe and stray a&nbspbit from the route, we will have the opportunity to admire these intricate structures. Beaver structures can be seen in the local backwaters and small streams flowing into the San.
These lovable animals feed on almost all available parts of coastal and aquatic plants: shoots, leaves, gulp and green bark. If they can, they choose the younger ones, i.e. smaller and certainly tastier ones, which are located up to approx. 10 meters from the river bank or backwaters. They prefer aspen and willow poplars (rich in salicylates, i.e. natural aspirin), as well as birch, hazel and alder. They do not disdain oaks, hornbeams and beeches, which is displeasing to tree defenders, especially when the trees are magnificent. Beavers also taste like fruit trees, e.g. apple trees, which in turn irritates some orchard owners. They are reluctant to nibble on spruce, fir, or pine trees, possibly because of the taste of the resin, which is not their favorite.

Beaver -&nbspguardian of its territory

Beavers that cut trees are often viewed as pests, but their environmental impact is positive as the area transformed by these animals becomes extremely valuable. They are true hydro engineers, and wherever they appear, they can change the environment in extraordinary ways. In small streams and in small river valleys, the beaver is a&nbspmaster at holding water. The river on which he builds a&nbspdam is piled up, overflows sideways, overflows onto meadows and floods the forest. With this method, beavers shape the environment for other species, especially those that need shallow water for life, e.g. larvae of aquatic insects (dragonflies, mayflies, mosquitoes), snails, frog tadpoles, fry. The freshly flooded meadow has shallow water and thick grasses, making much of it inaccessible to larger river fish. Thanks to this, the "beaver meadow" becomes a&nbspsafe place for the development of invertebrates, as well as young amphibians and fry. Of course, organisms migrate (migrate) and some of them will always get into deeper water, becoming food for large fish, but a&nbspflooded meadow is a&nbspreserve where most of them cannot hunt, which favors the dynamic development of biodiversity. Sometimes beavers do a&nbspgood deed for larger fish by making their way through shallow water to create channels and paths. Such natural "water streets" give the opportunity for larger specimens to feast on a&nbspso far inaccessible feeding ground.

All beaver backwaters, "non-beaver" swamps, quaking bogs, wet meadows, as well as low and high peat bogs, like a&nbspsponge, retain excess water, thanks to which they are rich in biodiversity. This unique value requires careful protection as it is rare. In the times of the Polish People's Republic, the whole country was managed by intensive melioration, consisting in digging a&nbspsystem of deep ditches and placing a&nbspnetwork of ceramic drains in the ground. These activities have degraded most of the wetland ecosystems. Meadows were springing up and more trouble with flooding emerged. Fortunately, the Bieszczady Mountains were deserted at that time and "at the end of the world", not all innovative ideas reached here, so today we can. 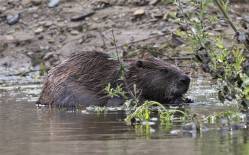